PRE-SALE TICKETS ARE SOLD OUT

The CCHS pre-sale allotment of Whitaker Bank/KHSAA Boys Sweet 16 tickets are sold out.

Tickets may be purchased online at khsaa.org or at the Rupp Arena Box Office the day of the game.

CCHS Sold out sections are 20, 21, 22, and 217 if you want to get tickets near those sections at one of the other ticket locations.

Congratulations to the CCHS boys basketball team for winning the 10th Region Boys Basketball Tournament Championship. The Camels will play University Heights on Thursday, March 15 at noon in the opening round of the 2018 Whitaker Bank/KHSAA Boys Sweet 16 at Rupp Arena in Lexington.

Tickets may also be purchased at the Rupp Arena box office or online through the ticket link at www.khsaa.org.

There will be no advanced tickets sold at Campbell County High School for quarter-final, semi-final, or championship games. Discounted game tickets will be available to students and fans at the conclusion of each Campbell County game at ticket sales locations inside Rupp Arena for the next Campbell County game. This will be fans’ only chance at discount price tickets. All tickets purchased online or at the ticket office the day of the game will be at regular price.

2018 Regional Championship Tee-Shirts will be available at the price of $12 each as soon as they arrive (anticipated availability is Monday, March 12) during the same times as ticket sales. 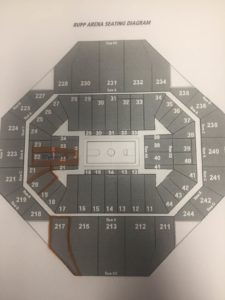 For those fans wishing to purchase tickets online for the CCHS boys basketball game and wanting to be near the CCHS assigned sections, here is a diagram of Rupp Area.  The CCHS students will be in section 22, the other pre-sale CCHS sections are 21, 20, and

217, more sections may be added depending on sales.