For the second year in a row, the Camels boys basketball team took their game to a higher level as they claimed another 10th Region championship by defeating the Scott Eagles 89-57 at the Mason County Fieldhouse. It was the first time in Campbell County High School history that a boys basketball team won back to back regional titles.

Unlike last year when the Camels surprised many people by knocking off favorite Montgomery County to claim the crown, they were considered one of the favorites to repeat. The Camels were up to the task as they defeated Bourbon County in the opening round by 23 points, then took out Pendleton County by 14 points in the semi-finals, before handing Scott a 32 point drubbing in the final game.

As in the previous tourney games, it was a total team effort which led the Camels over their opponent. And like last week’s district final against Scott, the Camels got off to a blazing start. A driving layup by Trent McGovney followed by a pair of Deondre Jackson baskets quickly put the Camels up 6-0. A Matt Wilson bucket and one following a Scott foul forced the Eagles to call a timeout down 9-0. Scott finally got on the scoreboard with a pair of free throws and a layup. After the Camels answered with a Dre Jackson three, Scott worked their way back to tie the game at 16-16 on an Eagle three point basket. Matt Wilson and Jake Franzen each added a score, and the Eagles closed out the quarter with two free throws to cut the Camel lead to 20-18.

The Camels opened up the 2nd period with an 8-0 run to push the lead out to ten with Dre Jackson scoring 6 of those 8 points. The Camels continued to build on that lead with everyone contributing; a Matt Wilson layup, baskets by Blake Losey & Cole Hegyi, a three by Jordan Day, and stick back baskets by Craig Neltner and Jake Franzen put the Camels up 44-26 at the half.

The Eagles scored the first three points to open the 2nd half, but any thought of a Scott comeback was quickly put to rest as the Camels kept up the pressure and outscored the Eagles 21-12 in the period. Not even 3 fouls each on Jackson and Trent McGovney helped the Eagles as a steady rotation of Camels entered the game and continued to extend the lead.

The 4th period was much the same as the Camels built on their lead, and Scott was unable to find any answers to the Camels defense. The outcome of the game was not in doubt; only the final margin of victory. After a series of successful trips to the charity stripe for the Camels, the Eagles elected to discontinue fouling, as Coach Russell pulled his Seniors from the game to the delight of the Camel crowd. The Camels dribbled out the running clock, the students rushed the floor, and the Camels were once again headed to Rupp Arena for the Kentucky Sweet Sixteen Tournament.

Matt Wilson led the Camels in scoring with 22 points on 8-10 shooting from the floor and 6-9 from the charity stripe to go along with 15 rebounds. Dre Jackson followed closely with 21 points on 8-13 from the floor and 3-4 from the free throw line. He also added 3 steals and 3 assists. Blake Losey, who suffered a severe hip pointer on Monday night, provided a gutsy performance reminiscent of Willis Reed, scoring 16 points and playing through pain the entire night. Blake also added 4 assists. Cole Hegyi had another good performance with 8 points, and Craig Neltner provided 7 points and 6 rebounds to help the cause. Jake Franzen put up 6 points and 6 rebounds, and Jordan Day added 5 points and 5 boards. Trent McGovney dished out 6 assists and suffered no turnovers as he fell victim to foul trouble for a large portion of the game.

The Camels will face Covington Catholic, the defending KY state champion, in first round action on Wednesday evening at 6:30 from Rupp Arena in Lexington. Congrats to Coach Russell, his staff, and to all the boys on a most historic achievement and best of luck in the Sweet Sixteen next week. GO CAMELS !! 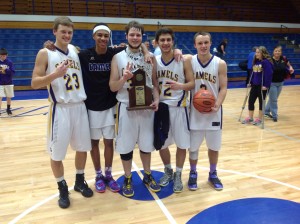