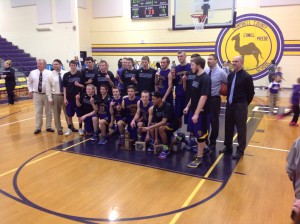 After the Lady Camels dismantled Scott on Thursday night to claim the 37th District girls championship, the boys were determined not to be outdone. One night later, the Camels also played Scott in the boys version of the 37th District tournament with the same result. The Camels avenged an earlier 9 point loss to the Eagles back in January with a dominating performance, cruising to a 70-26 win and claiming the 37th District crown for the second year in a row.

Before the championship game, however, the Camels had to get past their crosstown rival Brossart Mustangs in the first round on Wednesday night. The Camels squeaked by the Mustangs 52-50 back in January at the Crosstown Shootout with both teams missing a key player. All hands were on deck for both teams in this one as the Camels shot 65% from inside the arc and out-rebounded the Mustangs 30-13 for a convincing 66-44 victory.

The first quarter was the “Deondre Jackson show” as Jackson scored all 10 of his points in the period staking the Camels to a 22-10 first quarter lead. Jackson connected on 2 bombs from three land, a layup, and a resounding one handed dunk off a steal which ignited the Camels and the home crowd.

In the 2nd period, Matt Wilson went into “beast mode” grabbing rebounds and scoring inside, usually with several Mustangs hanging on his arms. The Camels outscored Brossart 13-9 in the period to grab a comfortable 35-19 lead at the half.

The Camels continued to go to their “beast” inside as Wilson scored the first 6 points out of the half scoring at will or finding his way to the free throw line. A bucket at the buzzer by Blake Losey gave the Camels a 17 point lead at 50-33 headed into the fourth.

The Camels maintained a comfortable lead throughout the final period as Brossart had no answers for the Camels defense. Trent McGovney hit 4-6 free throws in the final period to help put the Mustangs away and put the Camels in the championship game. The Camels got a total team effort in this one, and Matt Wilson paced the way with 26 points and 11 rebounds on 8-12 shooting from the field and 10-13 from the charity stripe. Blake Losey scored 10 points and grabbed 5 boards, and Dre Jackson added 10. Trent McGovney also added 10 points including 2-2 from behind the arc.

In the championship game, the Camels took on the #1 seed Scott Eagles. If anyone wondered whether the absence of Matt Wilson in their first meeting made a difference, that question was answered with a resounding YES! And while Wilson had another monster game for the Camels, it was a complete team effort on offense and defense from every player which led the Camels to a 70-26 beat down of the Eagles.

As in the Brossart game, the Camels came ready to play turning up the defensive intensity and making life miserable for any Eagle trying to score. On offense, the Camels were able to get out and run a bit scoring easy baskets in transition but also displaying patience and good ball movement to find the open teammate.

For all of the anticipation of a rematch with Scott in the district championship, this one was over early. With the score tied at 2 early on, the Camels went on a 16-2 run, and the route was on. A Matt Wilson layup was followed by back to back three pointers from Trent McGovney which got the Camels rolling. Two slashing layups by Deondre Jackson, a stick back basket by Craig Neltner, and two free throws from Cole Hegyi put the Camels up 18-4 after one period as the Eagles were only able to manage 2 field goals.

The Eagles continued to struggle scoring only free throws in the 2nd period as the Camels were relentless on defense. Everybody got into the scoring column for the Camels as Craig Neltner, Jake Franzen, Blake Losey and Jordan Day all chipped in baskets. Trent McGovney hit his third trey of the night going a perfect 3-3 and not even hitting iron. Deondre Jackson put the Camels up at half 50-18 hitting all three free throws after being fouled on a three point attempt just before the half.

The Camels continued to build on their lead, and by the end of the 3rd period, the running clock rule was instituted as the Camels lead exceeded 30 points. Coach Russell emptied the bench to start the fourth quarter as the JV squad finished the game and played well.

Matt Wilson was perfect on the night going 7-7 from the floor and 4-4 from the line for his second straight double/double with 18 points, 10 boards, and 3 blocks. Dre Jackson added 11 points and was a perfect 5-5 from the charity stripe. Blake Losey also scored 11 and dished out 4 assists. Trent McGovney finished with 9 on 3-3 from behind the arc, and Jordan Day had 4 assists.

Deondre Jackson and Blake Losey were selected to the All-Tournament team, and Matt Wilson was named Most Valuable Player. The Camels will head to the Mason County Fieldhouse on Wednesday night, March 4th to take on the Bourbon County Colonels in the opening game of the 10th Region tournament. Game time is at 6:00.

Congratulations to Coach Russell, the entire coaching staff, and all of the boys on repeating as 37th District champs. Come out and support the Camels as they look to defend their 10th Region crown and head back to Lexington. Huge shout out to the student section who showed up in mass and the Camel community. We will need all of you again this Wednesday night at the Fieldhouse. 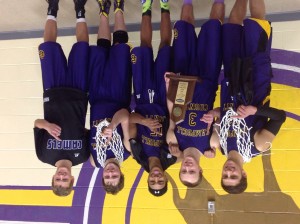 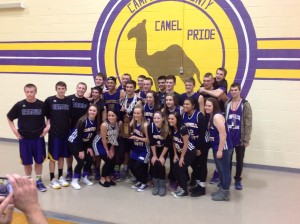