The JV boys basketball team played Saturday morning in the finals of the 37th District tournament. The opponent was the Brossart Mustangs, and in typical Camel/Mustang fashion, this one went right down to the wire.

The Mustangs came into this game with a 15-1 record after defeating Scott the previous night to gain entry into the final game. The Camels were looking to avenge a one point loss earlier this year in the Crosstown Shootout in January.

Early on the Mustangs took the lead in a low scoring 1st quarter as Garren Bertsch did his best to keep the Camels close by scoring the Camels first 2 buckets. At the end of one period, the Camels trailed 7-6.

The 2nd quarter was a bit more eventful as both teams picked up the scoring. The Mustangs led for much of the 2nd, and built their lead to seven points heading into the half. However in the Camels last possession of the half, Cameron Lemons drained a deep three at the buzzer to cut the Mustang lead to four at 22-18 and give the Camels some momentum heading into the locker room.

Any Camel momentum they had at the half quickly disappeared as the Mustangs scored the first four points of the 2nd half to lead 26-18. A Camel time out paid dividends midway through the 3rd period as the Camels went on a 9-1 run on treys by Bertsch and Joel Day and buckets by Lemons and Robert Marlow. The Camel comeback knotted the game at 27-27 after 3 periods.

In the 4th period, the Camels were able to stretch the lead to four with some timely scoring and Brossart’s lack of success at the free throw line. The Camels also played some stingy defense as they only allowed 2 field goals to the Mustangs in the 2nd half. A couple of baskets by Lemons, some Garren Bertsch free throws, and a Tanner Clos score on a nice feed from Lemons, put the Camels up four late in the fourth. Two Mustang free throws cut the Camel lead to 2 when Lemons was fouled on the Mustang press. Lemons sank both free throws to extend the Camels lead back to four. After an empty Mustang possession, Lemons and Joel Day each missed the front end of the bonus leaving the door open slightly for the Mustangs. With under 10 seconds and down four, the Mustangs hit a big three pointer to cut the Camel lead to one at 35-34 as the Camels backed off on defense to avoid fouling. After a Mustang timeout, the Camels were successfully able to inbound the ball and run out the final 2 seconds for a 35-34 victory.

Garren Bertsch and Cameron Lemons each scored 11 to lead the Camels and claim the 37th District title. Congratulations to the boys and coaches Jerry Gross and Dave Orth on the big win. 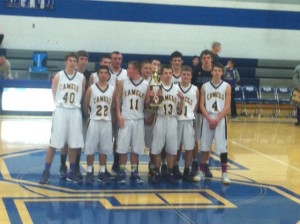