Camels Win A Pair Over The Weekend

The Campbell County boys basketball team got off to a good start to the season with two wins over the weekend. On Friday night the Camels won their regular season and home opener against Dixie 58-51. After a short nights sleep, the Camels traveled to Wilmington College on Saturday morning and defeated the Chillicothe Cavaliers 55-45 in the Ohio Valley Hoops Classic.

On a misty, foggy Friday night the Camels hosted the Dixie Heights Colonels who were 0-1 coming in to the game. The Camels seemed to be in a fog early with several turnovers and missing five of their first six shots. Blake Losey hit a layup to get the scoring started for the Camels as Dixie raced out to a 9-4 lead. After a 3-ball by Deondre Jackson and a Trent McGovney layup, the Camels tied the score at 9-9. Another layup by Dre Jackson gave the Camels their first lead at 11-9 to end the first quarter.

The Camels shook off the fog in the 2nd quarter and extended their lead to ten at 19-9 on a free throw by Jake Franzen, a layup by Losey and five more from Jackson. Matt “Windex” Wilson was cleaning up the glass and joined the party scoring 8 straight points including an “old fashioned” three point play to maintain the Camels 10 point margin. A layup and 2 free throws from McGovney, a free throw by Jackson and a bucket by Craig Neltner gave the Camels a 34-19 lead at the half.

The Dixie Colonels went on a 9-1 run to start the 3rd period and cut the Camels lead to 7 at 35-28. Trent McGovney, who had a strong 3rd period, hit a huge 3 from the top of the key to stop the Dixie run. McGovney and Wilson continued to score for the Camels, and after another basket and “and 1” from Wilson, the Camels lead was back to 15 at 46-31 to end the third period.

Baskets by Losey and Jackson to start the 4th period pushed the Camels lead to 19. After a Dixie timeout, the Colonels scored the next 4 points, but a bucket by Franzen made the score 54-35. The fog once again consumed the Camels midway though the 4th quarter as Dixie went on a 13-0 run to cut the Camels lead to 54-48. A free throw from Losey halted the Dixie run, and a late 3 from Dixie was a little too late as the Camels made free throws down the stretch to secure the win 58-51.

The Camels were led in scoring by Dre Jackson with 17. Matt Wilson had a double/double with 14 points and 10 rebounds. Trent McGovney chipped in 11 in the victory.

After a quick nap and a cup of coffee, the Camels hit the road early Saturday morning to play in the Ohio Valley Hoops Classic. The Camels took on the Cavaliers from Chillicothe, Ohio. The Cavaliers were hot early from behind the arc and jumped out to an 8-2 lead. Jake Franzen and Craig Neltner had early buckets for the Camels, but the Cavaliers couldn’t miss pushing the lead to ten at 16-6. Playing without Deondre Jackson in the first quarter, the Camels were determined to pound the ball inside to Matt Wilson. Wilson responded by scoring 10 straight points over the smaller opponent even though he was being double and triple-teamed. Cole Hegyi added a bucket, but the Cavaliers kept pace leading 23-18. A Craig Neltner layup and block on the other end led to a Dre Jackson layup cutting the Camels deficit to three. A layup by Blake Losey and another by Wilson gave the Camels their first lead at 26-25. They would never trail again. The Camels pushed the lead at half time to 30-25 after buckets by Trent McGovney and Dre Jackson.

Jake Franzen started the Camels scoring in the 2nd half, and after a Blake Losey layup, the Camels had their largest lead of the game at 37-27. Both teams continued to trade baskets, and the Camels lead was 41-35 at the end of the 3rd period. Jordan Day offered solid minutes for the Camels, and his 3 point play early in the 4th pushed the lead to nine. The Cavaliers would get no closer than five points as the Camels played a solid 4th quarter to maintain their margin. Late free throws by the Camels pushed the final margin to 55-45.

The Camels were led by a strong inside game from Matt Wilson scoring 16 points on 8-14 shooting and adding 8 rebounds and 2 blocks. Dre Jackson shook off a poor shooting night but was 6-8 from the FT line to finish with 10 points. Blake Losey added 7 points and Trent McGovney, Craig Neltner, and Jake Franzen all added 5. Matt Wilson was named Player of the Game for his strong performance.

The Camels next opponent will be the Holy Cross Indians on Wednesday night December 10th at CCHS. Please remember to bring a new, unwrapped toy to the game to contribute to the Camels first annual CCMS/CCHS Boys Basketball Toy Drive and receive FREE admission. 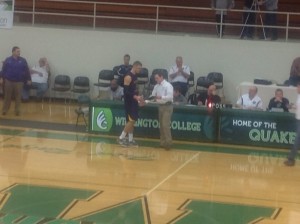 “Player of the Game” Matt Wilson