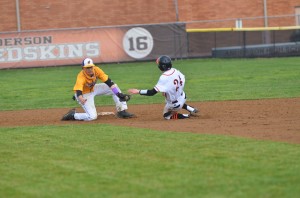 Willy Cox brought home the go-ahead run to give Campbell County the lead in the seventh inning, as the Camels hung on to beat Anderson 5-1 on Thursday.  With the score tied at one, Cox came to the plate and singled, plating Cameron Edwards.

It was a good day at the plate for Campbell County Camels ‘s Brady Sansom. Sansom went 2-4, drove in one and scored one run. He singled in the third inning and doubled in the seventh inning.

The Camels relied on Johnny Eblin to eat up innings en route to the win. Eblin pitched six innings and allowed one earned run, six hits and no walks while striking out three.  All down after interruptions by both rain and lightning delays.

Stange couldn’t get it done on the hill for Anderson, taking a loss. He lasted six innings, walked two, struck out five, and allowed four runs.

The third inning saw Anderson score its only run on the day on a groundout by Hopkins.

Campbell County went up for good in the seventh scoring five total runs, which came home on an RBI double by Sansom, and a two-run single by Carson Plessinger. 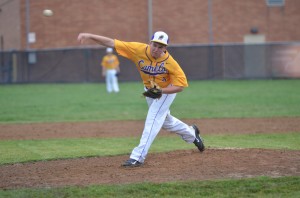