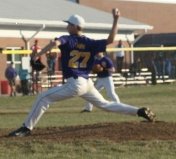 Combs got the win for Beechwood. He allowed one run over four innings, struck out seven, walked one and gave up four hits.

Joey Dawn ended up on the wrong side of the pitching decision, charged with the loss after the Camels offense from the previous night was quieted.  He pitched outstanding as he went the full six innings for Camels, walked one, struck out two, and allowed four runs.

Beechwood went up for good in the first, scoring three runs on a sacrifice fly by Slusher, an RBI single by Schmidt, and an RBI triple by Suchniek.

Beechwood answered Campbell County Camels Varsity’s top inning with one run of its own in the sixth. Beechwood scored on a fielder’s choice.