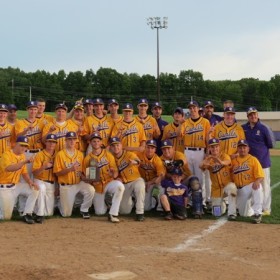 Camels beat Scott 9-5 in seven innings on Tuesday behind Paul Griffis, who went 3-3 at the plate as the Camels complete a season sweep of District opponents and lay claim to the tournament championship.

Paul singled in the fourth inning and doubled in the first and fifth innings.

Rob Franzen recorded the win for Camels even though he allowed five runs over seven innings. He struck out five, walked three and surrendered six hits.

Scott jumped out to an early 2-0 lead in the top of the first. Scott’s rally started when Reed Spata singled. An error then moved Reed Spata from first to second. More runs came home for Scott when Castleman scored on a groundout by Seth Robinson.

Camels didn’t relinquish the lead after scoring six runs in the second inning when it scored on two doubles, an error, and two singles.

Camels added two more runs in the bottom of the fifth. The inning looked promising, as Mitch Kramer singled, scoring Cameron Edwards to kick things off. That was followed up by Griffis’ double, bringing home Kramer.

Camels advance to the 10th Region Tournament, which begins Memorial Day/  Tournament draw and gametimes will be made Saturday at 9:30 AM.