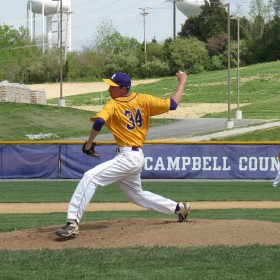 Camels pounded Brossart on Saturday 8-0 at Tom Mohr Field in seven innings to claim the  #1 seed in the 37th District.

Sophomore Johnny Eblin racked up three RBIs on one hit for Camels. He doubled in the first inning. clearing the bases after Rob Franzen singled, Avery Wood walked, and Joe Kramer lined a single to Right to load the bases.  Eblin would score off the single by Sophomore Cam Edwards to give the Camels a first inning 4-0 lead.

That was all that was needed for Rob Franzen who held Brossart scoreless for six innings. Rob Franzen struck out six and allowed four walks and two hits.  Franzen’s dominant performance earned him his fourth win of the season.

Camels built upon its lead with four runs in the sixth. Tyler Walsh doubled, plating Edwards, Paul Griffis and Mitch Kramer to start the inning.

The Camels swept their 37th District opponents after shutting out Brossart, Scott and Silver Grove by combined runs of 22 to 0.  The Camels will host the 37th District tournament at Tom Mohr field, where they played all three opponents this season.  The tournament draw has been set, with the top seed Camels hosting #4 Silver Grove and #2 Scott home versus #3 Brossart on Monday May 20th and the victors facing off on Tuesday May 21 for the championship game.